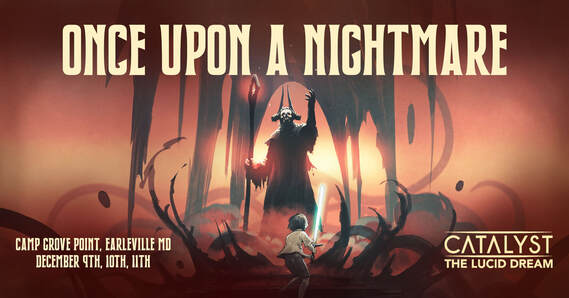 "Good evening Dreamwalkers, this is the Hope's A.I. speaking."

“…which sounds like it was named by a fairy…”

“All passengers, islands, vessels, and stowaways are accounted for.”

“...Oh, it was named by a fey scout from Solstice? My apologies to the island then…”

“I have detected a nearby cosmic anomaly which makes this place unsuitable for establishing a basecamp. High levels of caution are advised due to the metaphysical disturbance put off by this phenomenon.”

“…I was only kidding about the stowaways. We would need to charge for passage to call them that…”

“As a reminder, children and loose objects should not be left unattended in or near the bridge during arrival.”

“As always, have a successful dream."~

There was a tap on the RV window that startled one of the sleeping passengers.

When someone finally answered, they were greeted by a burly man with a handlebar mustache, trucker hat, and a grey flannel sweater. “I hear you kids got to get through the Appalachias? I’m headed that way, just follow ma' plow. The big blue’n with Edgar Allen Snow on the side. Uh, the names Rod.”~

A chill overtakes you as the vision changes.

You see a cold blue hand holding a frozen quill begin to draft a party invitation. The words “Your Royal Highness, Princess of Solstice…" appear on the page like magic.~

The sound came from a canopic jar made of tinted glass and with the head of a bird that had a long-curved beak. Something was moving around inside and a flash of gold fabric was visible enough to catch any perceptive eye. 'BANG-BANG-BANG' -the noise continued desperately.~

A blood stained suit worn by an invisible figure appears to you.

They also wore a familiar reflective mask and made their way down a featureless concrete corridor, then boarded a plain looking lift. Two floors up the suit was joined by the pale man known as Mister Grey.

“This had better be important Agent Dismay.”

The mask bobbed, “Sir, I encountered an Interference during the Test Screening. I believe we have a shark in the water.” The arm of the jacket moved as Dismay’s invisible hand produced a small red vial from one of its pockets.

"You have my attention," replied Mister Grey…~

The sound of industry and experimentation -of power tools and sparks- fill the air.

​The Lizardkin that now inhabited the Hope made their home in one of the smaller settlements outside of the village where the dreamwalkers lived. They usually kept to themselves, but today the place was abuzz with activity. One of them rushed from a workshop holding a strange device over its head. The device omitted a loud, ‘Ding!’ which was followed by growls and shouts of success from a gathering crowd.~

Your vision is filled with unformed dreaming as motes of dark-purple and blue-black mist churn around you.

An impossibly large tree appears through the fog and begins to take shape. It is barren and has the visage of a great skull with a crown of petrified branches -each as large as redwoods. It is covered in brittle bark that has been bleached by sunlight.

You enter its yawning maw and pass into ancient elven halls that were built in the interior of the tree. They tell you a story from Old Zygaxia as the context of the ruined structure forms in your mind.

This World Tree once resided in the eastern Darkwood at the foot of the Midalrus Mountains, but died thousands of years ago. Then one day it slipped through the cracks and landed in the Dreaming. At one point, trolls from the Mountain Kingdom had drilled into the wood for rare materials but that too had happened long ago. The enormous boreholes they left behind gave it the ghastly outer appearance of death.

As your mind wanders through old galleries you see placards representing the different bloodlines of the Aelvaari Royal Family. Each is emblazoned with the words of their clan. Clan Summerheart. Eternal Shepherds. Clan Stormhelm. Our Land, Our History. Clan Dawnsinger. Beacon in the Darkness. Clan Starweaver. There is Strength in Solace.

Further up the branches you find a laboratory with large empty window frames that overlook an abyss of unformed dreaming. On the floor, strewn amidst the broken glass, are schematics for strange devices. A large nest also occupies the corner of the room.
​
Deep in the roots of the tree a nightmare beast stirs and the vision fades.~

Väinämöinen makes his presence known. Then you feel a sense of dread and dire warning from the old forge as someone else’s nightmare takes shape from a long time ago….~

((Prologue to be continued at lay-on this weekend!))