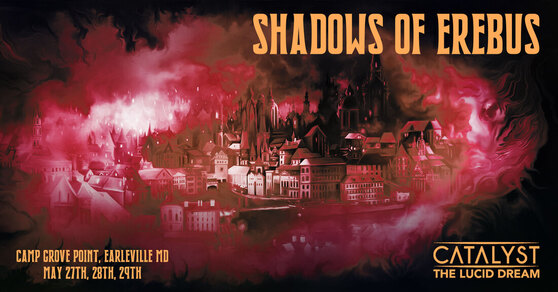 You see painted clouds in hues of pale purple and reddish ochre.

Your dreams show you the familiar silhouette of Paavali standing on a hill and looking across the land that lay before him. The mists span the horizon like an uneven wall rising up from the forest. Their uppermost edge is outlined in orange light that glows like melted steel and separates the mists from the pale grey sky behind it. This is all contrasted by a single mesa of black-grey stone that takes the shape of a tower. Large boulders encircle the tower and reflect the languishing sunlight, giving them the appearance of a molten necklace of pearls at the throat of a great monolith. ​

The mists are like marching soldiers against an unseen barrier. They boil angrily in place -unable to advance or retreat- and they were impenetrable. Even the sun can do little more than cast light over the edge. The tower was also misleading. It was once decorated with spiraling mosaics of blue and purple tiles, but they had long since faded to black, and its battlements were pointed inwards, like that of a prison or something else meant to keep danger contained.
​
Paavali thought about this every time he saw the view. How deceptive it was and how easy it was to swap the meaning of its truth and its fiction. In the decades since he had first come to Bleakfalls, Paavali dared not trek up the hill to that tower to see what it held. Something powerful lurked there and it seemed to be only the guard dog. The people of Bleakfalls called it “The Necropolis” but their previous rulers kept its purpose a secret from them. All they knew is it was important enough for their King Deimos to exile his political rival Vardoger during the War of the Accords. That all seemed like ancient history now. Two men who were fighting over the crown of a country that no longer exists.

‘But are their secrets not unlike my own?'

Paavali had so many now, and all he wanted to do was get rid of them all. But he instinctively recoils from the thought, ‘This hope that the Dreamwalkers brought with them was so dangerous, but in this new perspective of the Grand Cycle, maybe it was needed. Things could be fixed, could be balanced -or even tipped in the Dreaming’s favor.’
​
He continues watching as the last light of day is replaced by the starlight of the realms above. The ring of stones around the tower glows white like beacons signaling their magic is still intact. Then Paavali continues on. The Aspect Vex had requested he meet her shortly and he best not keep the Soulforge waiting.

Now you are looking out from an old sea cave where cracked porcelain skin holds blank eyes that stare endlessly and sightlessly at a frozen lake. Pages are splayed around them like the spokes of an enormous wheel, and patches of moss crust over spots of rust on gears.  The sensation of unimaginable heaviness seems to permeate the air so thoroughly you can feel it in your bones.
​
Like life beginning anew, a line of hermit crabs exits from the back of the cave. They give the automaton a wide gap as they pass by the crumpled being and march into the sea. You begin to hear the ticking of a clock and one of the crabs turns startled at the figure, but suddenly there is a loud crash of waves and your vision exits the cave and dives into the now-flowing water.

You instinctively hold your breath and the vision changes.

You emerge from a swamp with anger in your heart and a singular purpose to protect the forest. You shamble forward on all fours, keeping low enough to squeeze under the gap in the fence. Just like the mirror showed you. Once inside, you begin your hunt. As the first person comes into view, you launch yourself forward to snap them in your powerful jaws and your mind swims to darkness as others call for weapons. It seems that today the invaders choose violence.

Your thoughts become your own again, but you hear voices moving past you in the dark.

A hushed tone whispers, “I’m telling you, he had a cape and claimed to be a dreamwalker! Said he was wondering around in the forest for a week. Then he gets to the proper and just before he gets an audience with Town Speaker Dayton…”

“Well, what happened next?” asks a second speaker, but the answer is garbled.

A third angry voice declares, “Damn Alligator! I swear it’s got it out for the loggers. That’s too more attacks this week, and it’s the same one with the wooly fur!”

And a fourth complains, “Master of games? More like master of lining his own pockets. A real game involves skill and besides if that prize really is an artifact of Serenity, then it belongs in a museum!”

“Batter up!” shouts a fifth.

Another voice sobs, “Husks and Lurkers were enough. Do I even want to know what kind of nightmare a Vampire is?”
​
And a final voice asks excitedly, “Dreamwalkers? Arriving so soon? It’s only been a few days. Elder Lucas said the ones staying here said it would be a month!”

You awaken in the forest.